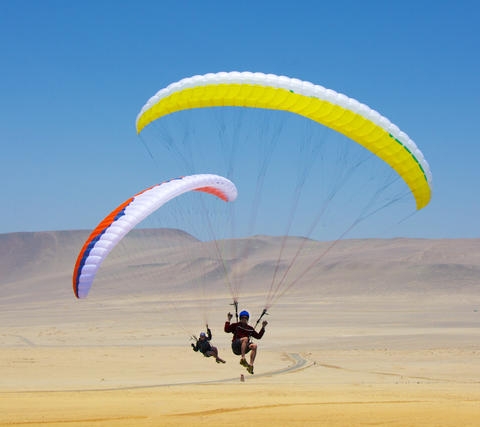 The new Zero is the most precise and compact mini-wing that we have ever flown. This advanced mini-wing design was more than two years in the making, and is based on what we have learned through the development of our smaller-sized mountain gliders and also the technological advances we have made in the Ozone Performance Project.

The Zero is the only mini-wing that features the patented Ozone SharkNose technology. The SharkNose, as proven in our highest level competition wings and now the Mantra and Delta series, provides enhanced stability at low angles of attack (accelerated flight) and also high angles of attack (slow speed flight, thermalling). In addition, it provides a high level of spin-resistance, generally improved handling, and increased speed and glide performance. In short, the SharkNose has significantly improved every aspect of flight in the Zero’s design platform, making it a unique high-performance mini-wing which remains accessible and easy to use.

The “Zero” stands for speed and precision. While speed was a major concern for us during the development of this wing, our primary focus was on creating a stable and usable speed range. The improved stability of the SharkNose in accelerated flight gives the Zero a solid and compact feel at high speeds.

Another crucial benefit of the SharkNose technology is the higher internal pressure at high angles of attack. What this means in handling terms is an increased brake range, and high spin resistance, which equals fun: the Zero reacts quickly and predictably to solid brake inputs, making it a highly maneuverable and easy to pilot through high-banked turns.

Efficiency at the leading edge is crucial to all areas of performance and handling, and the revolutionary SharkNose design has created the most efficient leading edge in existence. Smaller inlets increase internal pressure at all angles of attack, and decrease drag, making for a more mechanically stable and efficient profile in all modes of flight.

The Zero is equally comfortable in light or strong thermal conditions, and in no-wind or high-wind launches and soaring. It is truly one of the most versatile wings that we have ever flown. The Zero will not only increase the range of flyable conditions for you as a pilot, but also enhance your enjoyment of the simplest descent flights. Thanks to its high efficiency, the Zero is not just for strong wind or thermal soaring – you will be able to soar in similar conditions to larger wings, but enjoy more responsive handling and higher speeds.

The Zero is equipped with both trimmers and a speed system, which may be used individually or together. We do not recommend flying any highly-loaded wing in accelerated configurations in turbulent conditions. Know your limits, and only fly the Zero in conditions and at flying sites that are suitable to your skill level.

The Zero is accessible and easy to use, but is generally flown with higher wingloading than standard paragliders and therefore all pilots who are new to mini-wings should consult with an experienced instructor before their first flights with one. The Zero is suitable for paraglider pilots of intermediate skill, and above, who are trying this ‘mini-voile’ sport for the first time. It is also, of course, perfect for more experienced pilots who wish to fly it at a higher wing-loading and enjoy the speed and precision of this wing at its full potential. The table below shows recommended weight ranges for this wing, which does not have EN flight test certification.

We have enjoyed flying the Zero in a wide range of conditions, from coring thermals with larger standard paragliders on light days, to soaring in moderate to strong winds and carving down the mountain on “sled-ride” days. We’re looking forward to hearing what you think of this new design!